The Plasma Spraying Process is basically the spraying of molten or heat softened material onto a surface to provide a coating. Material in the form of powder is injected into a very high temperature plasma flame, where it is rapidly heated and accelerated to a high velocity. The hot material impacts on the substrate surface and rapidly cools forming a coating. This plasma spray process carried out correctly is called a "cold process" (relative to the substrate material being coated) as the substrate temperature can be kept low during processing avoiding damage, metallurgical changes and distortion to the substrate material.


The plasma spray gun comprises a copper anode and tungsten cathode, both of which are water cooled. Plasma gas (argon, nitrogen, hydrogen, helium) flows around the cathode and through the anode which is shaped as a constricting nozzle. The plasma is initiated by a high voltage discharge which causes localised ionisation and a conductive path for a DC arc to form between cathode and anode. The resistance heating from the arc causes the gas to reach extreme temperatures, dissociate and ionise to form a plasma. The plasma exits the anode nozzle as a free or neutral plasma flame (plasma which does not carry electric current) which is quite different to the Plasma Transferred Arc coating process where the arc extends to the surface to be coated. When the plasma is stabilised ready for spraying the electric arc extends down the nozzle, instead of shorting out to the nearest edge of the anode nozzle. This stretching of the arc is due to a thermal pinch effect. Cold gas around the surface of the water cooled anode nozzle being electrically non-conductive constricts the plasma arc, raising its temperature and velocity. Powder is fed into the plasma flame most commonly via an external powder port mounted near the anode nozzle exit. The powder is so rapidly heated and accelerated that spray distances can be in the order of 25 to 150 mm. Plasma Flame Theory 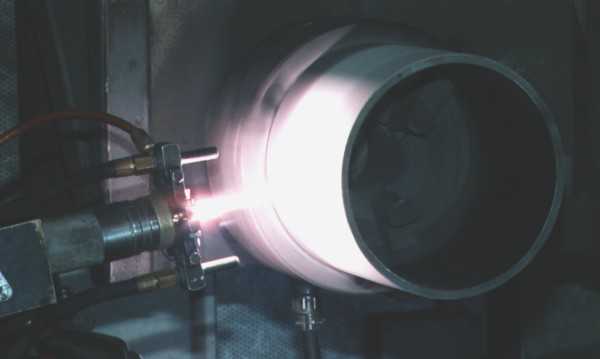 The plasma spray process is most commonly used in normal atmospheric conditions and referred as APS. Some plasma spraying is conducted in protective environments using vacuum chambers normally back filled with a protective gas at low pressure, this is referred as VPS or LPPS.


Plasma spraying has the advantage that it can spray very high melting point materials such as refractory metals like tungsten and ceramics like zirconia unlike combustion processes. Plasma sprayed coatings are generally much denser, stronger and cleaner than the other thermal spray processes with the exception of HVOF, HVAF and cold spray processes. Plasma spray coatings probably account for the widest range of thermal spray coatings and applications and makes this process the most versatile.


Disadvantages of the plasma spray process are relative high cost and complexity of process.